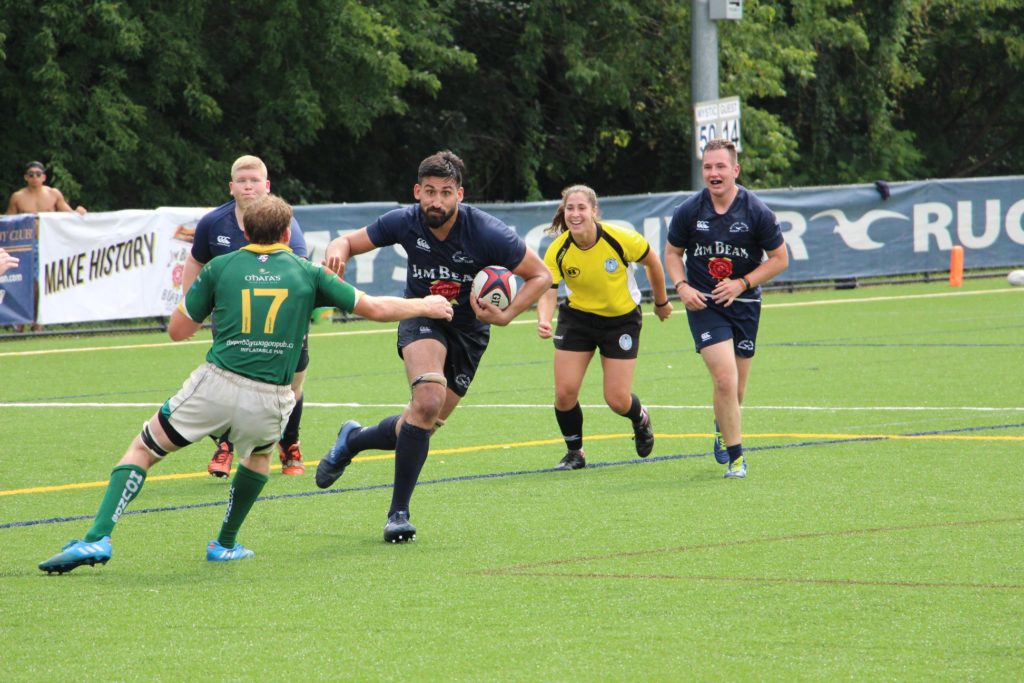 The Fall 2019 season kicked off with a weekend of games against our longtime rival, the Boston Irish Wolfhounds. Mystic Old Boys started the day with a victory against the Greyhounds, winning 34-22. The Wolfhounds usual strong, experienced side tested the fitness of our old guys in the first half, keeping the score tied at 17-17 at the break. The side gelled in the 2nd half, though, as the veterans up front did a better job of securing possession in the ruck and set pieces, providing possession to the backs. The backs, rather than playing for one on one opportunities, began to string passes together and found gaps in the defense for several long tries. The Wolfhounds kept up the pressure, pulling within five before two late Mystic tries put the game away. The Old Boys will suit up one more time this fall, on 10/20 vs. South Shore.

The D2 Barbarians match was up next and started the scoring immediately. New Mystic Eric Kasiita scored just one minute into the match to give the boys in blue an early lead. Not to be outdone by his fellow Ugandan, Adnan Kawuma followed that try with one of his own, stiff-arming Wolfhounds’ defenders that tried to tackle him. The early 10-0 lead grew further with Aki Raymond, John Daly, and Aaron Evans finding their way into the try zone as Spike Armstrong notched three conversions in his return to the 15’s pitch. Mystic led the Wolfhounds 36-14 heading into halftime. The second half proved to be more of the same for the Gulls, as new Mystic Brian Patterson scored his first try for the team in the half’s early minutes. Malik Wilbon showed off the speed we saw throughout 7’s season, scoring two tries, and Skipper John Daly added another try before the end of the day. Stephen Diamantopoulos slotted three conversions in the second half, and the Mystic River Barbarians beat the Wolfhounds 67-26. Both Mystic River sides have a bye over the holiday weekend.

We hope to see Mystic Nation out in full force for this early season showdown!

As always, thank you for your support.