The Mystics put on a great display of rugby to close out their summer campaign to claim the bronze at the 2015 National Club 7s with a 22-19 victory over 1823.

After an impressive 3-0 start in pool play, the Mystics went on to wrap up day 1 of the National 7s with a decisive 24-5 victory over the Army Selects in the Cup Quarter Finals. The Mystics had a chance to rest up overnight before they faced the Seattle Saracens in the Cup Semi-Final. The Mystics just didn’t quite click against Seattle this morning, and found themselves down 12-0 before they had really gotten going. The boys started to get into gear, but the Saracens didn’t let the Mystics back into the game. The Mystics were thoroughly frustrated by the end of the match, and the defending champions ran away with a 27-0 victory before they went on to a 31-10 victory in the final.

The Mystics then regrouped before facing off against 1823 from Columbus, OH in the bronze medal match. The Mystics put their earlier loss behind them and came out firing. They raced away to a 17-0 lead at the half through tries from Vini Daley, Evin O’Driscoll and Chris Frazier, and extended the lead to 22-0 just after half time through a try from Jared Collinson. However, 1823 showed exactly why they made it this far in the tournament and were the only team to beat Seattle this weekend. They got on the board with just over 4:00 minutes to go, leaving the Mystics up 7-22, and then scored off the kickoff to pull the score back to 14-22. As time ran low, 1823 pulled themselves within reach from a third try, leaving the Mystics with a 22-19 lead. The Mystics managed to claim the final kickoff and cleared to touch to claim the bronze medal.

We want to say a huge thank you to our sponsors, Jameson Irish Whiskey, Concord Wealth Management and The Harp for their support this summer. We also want to give a massive shout out to all of Mystic Nation for supporting us all season, and want to say an extra large thank you to all those who donated to our Indiegogo campaign. As of this evening, we’ve easily surpassed our goal and currently stand at 105% of our original target!

We also want to congratulate all of the players and coaching staff who made this 7s season such a success. They’ve put in a huge amount of effort and time to work through the Northeast qualifiers and the entire national tournament. It is also important to note that the coaches and most of the players came straight out of the 15s Final Four appearance into the 7s season, so they really deserve a huge amount of praise for their commitment and hard work all the way through the club. That kind of perseverance and hard work wins silverware! 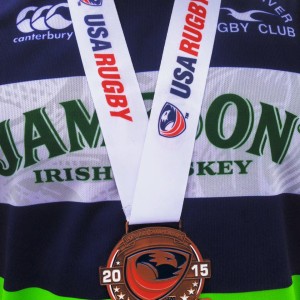